Yoga Master: Who is Desikachar

Son and student of T. Krishnamacharya, TKV Desikachar is one of the world’s foremost yoga teachers and is recognized as a direct lineage holder of the ancient masters to the modern world. Graduated as an engineer, he soon decided as a young adult to dedicate his life to yoga, when he realized the extraordinary results achieved by his father’s students.

He studied with his father until the rest of his life and later was the founder and managing trustee of the Krishnamacharya Yoga Mandiram, which he started to share and transmit the teachings of his father. Desikachar has been traveling worldwide since 1960 and has taught in almost every continent. He is the author of numerous books including the following: “Health, Healing and Beyond” and ” The Heart of Yoga: Developing a Personal practice”.

He has also recently authored the first-ever translation of the classical yoga text “Yoga Yajnavalkya Samhita”. T.K.V. Desikachar is today, a source of knowledge, and a living example for many reputed yoga teachers in Europe, the United States and Canada.

Kausthub Desikachar, son and student of T.K.V. Desikachar, continues to transmit the teachings of his grandfather to the modern-day audience with his abilities of teacher, communicator and editor. Graduated as a master in management and administration he succeeds in establishing the link with the older tradition, and the Cyber-era of the new millennium.

Growing up in the house of T.Krishnamacharya, Kausthub began to learn yoga as a kid. He started teaching children at the age of 13. After completing his dual master in economics, and business management, Kausthub decided to dedicate his life to learn, and spread the teachings of his grandfather. He graduated with distinction the “post-graduate diploma in yoga” offered by the KYM, where he is now a senior teacher, and also its managing editor.

Traveling each year extensively, Kausthub has taught in Europe and America on a wide variety of yoga topics. Recently he was also invited by Yoga Journal & Omega Institute to teach at their conference. As an author, he has written two books « Vedic Chanting Companion », which he has written with his father, and one more book on teaching to youngsters, which is soon to be released in French. He is also working on a new book with his father on the application of yoga to different needs. As editor, he has been responsible in bringing out a lot of publications for the KYM. Kausthub lives in Chennai (Madras), India with his family.

Chakra Healing: A Beginner's Guide to Self-Healing Techniques that Balance the Chakras
$7.99
Buy on Amazon
Bestseller No. 4 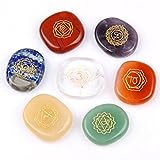